On August 23, 2017 the Massachusetts Division of Marine Fisheries (MA DMF) Habitat Team set out for Swampscott Harbor in search of eelgrass. Armed with a Humminbird acoustic sonar transducer, an underwater video camera, and the DEP 2012 aerial photo-interpretation eelgrass maps, we anticipated finding a bed similar to the size and footprint of the Swampscott Harbor mooring field, where DEP previously mapped a 23 acres meadow. 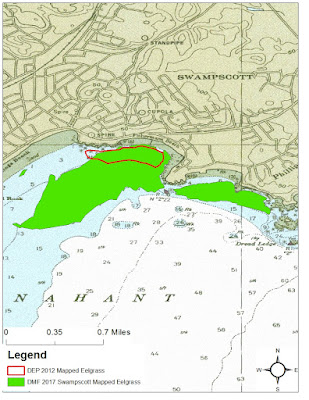 We were happy to find that not only has the Swampscott bed expanded to a total of 153 acres (a 665% expansion from DEP's 2012 mapping), an adjacent bed exists to the east of Swampscott Harbor which had not previously been mapped. This "new" bed is approximately 36 acres in size and is located in the cove east of Lincoln House Point.  While it is very close to the Swampscott Harbor bed, we believe that they are actually separate beds and not connected (see map). The eelgrass appears to be dense and healthy, and the sediment sandy. Reproductive shoots, some epiphytes, colonial tunicates, snail grazing, algae and potentially wasting disease could also be seen in the groundtruthing images (photos below). We found a somewhat uncommon algae, which we believe to be a Cord Weed (Chorda sp.), growing near and further seaward of the eelgrass meadow. It has a more similar appearance to eelgrass than most algae do (photo 4), however it did not share the same characteristic appearance in the sonar data so we are confident it was not mistakenly mapped during this survey.

Despite the good health and expansion of the bed in Swampscott Harbor, several human created impacts were observed in the sonar images.  The large pier and several dozen moorings in the harbor create scars and bare areas within the bed where pilings have been placed or  mooring chain has dragged on the bottom.  Too many direct impacts such as these could contribute to the bed becoming stressed or fracturing and shrinking in overall size. Impacts can be reduced by using specially made conservation moorings designed to reduce scars and by reducing/limiting the number of new and existing moorings located within the eelgrass bed. 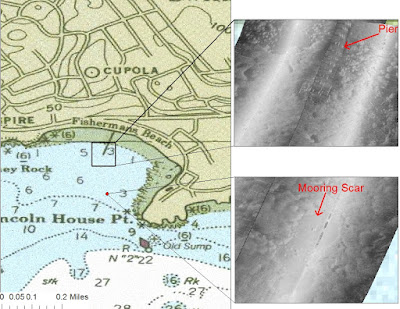 By using side-scan sonar imaging to map eelgrass, we are able to quickly and effectively locate the extent of beds including areas unable to be confirmed by aerial imagery alone. An underwater video camera is used to groundtruth the sonar data.  We believe that continued use of sonar imaging will allow us to keep discovering new and/or expanded eelgrass beds in Massachusetts, as well as keep close records of how mapped eelgrass beds fluctuate over time. 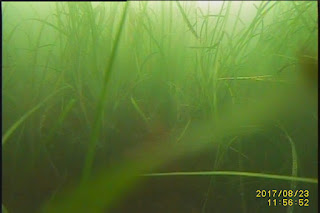 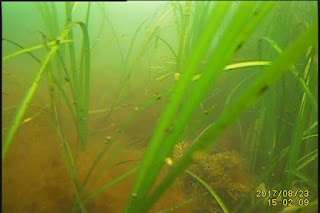 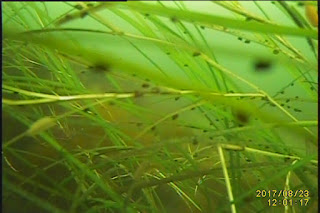 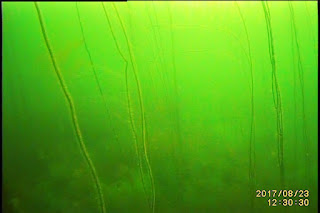