After great transplanting success in Boston Harbor and Salem Sound under the HUB3 mitigation project, MarineFisheries is at it again. In early April 2017, divers from MarineFisheries (DMF) and Northeastern University (NEU) began the spring planting of the first quarter-acre site, which included harvesting eelgrass from multiple donor sites, weaving the eelgrass into burlap discs using the method developed by Chris Pickerell, of Cornell Cooperative Extension, and planting the discs at Middle Ground in Salem Sound.
Eelgrass (Zostera marina) is an important marine flowering plant that provides habitat for many fish and invertebrates including commercially and recreationally harvested species such as winter flounder, bay scallop and American lobster. Widespread eelgrass declines in Massachusetts, including a documented 18% loss of eelgrass in Salem Sound between 1995 and 2012, have lead to concern and a call for increased protection and restoration efforts. The two quarter-acre sites were planted in a checker-board pattern that was designed to enhance the spread and expansion of the grass and provide immediate habitat structure and function.

After monitoring confirmed that the Spring quarter-acre restoration site had survived and the eelgrass looked healthy, Fall planting took place in late August and early September at an adjacent quarter-acre site on Middle Ground.  The Fall restoration process was conducted utilizing the same methods as the Spring planting for a seasonal comparison.  On September 7, the final plots were planted at Middle Ground successfully.  We will be back in October to monitor after one month, then back again in 6 months and one year.

Funding for this fisheries habitat restoration is from the Massachusetts In Lieu Fee Program (ILFP), developed by the Army Corps of Engineers and administered by the Massachusetts Department of Fish and Game (DFG).  The ILFP affords Corps permittees the option of paying a fee as mitigation for their project impacts to federally-regulated aquatic resources, in-lieu of conducting their own on-the-ground mitigation project.  As The Commonwealth’s program sponsor, DFG aggregates the ILFP payments for use on larger-scale mitigation projects with long-term monitoring.  The goal is to increase the likelihood of mitigation success by scaling up the restoration and monitoring effort.  Proposals for ILFP funding must meet prioritization criteria outlined in the ILFP instrument including targeting resources under threat, restoration near the same area where the impacts occurred, and compatibility with broader conservation and management initiatives.  DFG has collected over $1,000,000 in ILFP payments from 26 individual permitees since the program began in 2014 and is currently in the process of identifying and selecting other mitigation projects for a future round of funding.  More information about the ILFP and the prioritization criteria can be found online here (http://www.mass.gov/eea/agencies/dfg/about/in-lieu-fee-mitigation-program-for-massachusetts.html).

In addition to a habitat restoration, DMF is also testing the use of multiple donor sites to improve restoration success by increasing genetic diversity and resilience to disease stress. By testing the genetics of donor sites, we hope to greatly improve the results of future restoration efforts as well as continue to expand our understanding of what characteristics make an ideal donor site and a successful restoration.

Planting along three 40 meter transects, MarineFisheries biologists and the scientists from Northeastern scooped the sand and rocks away, placed burlap disks woven with eelgrass plants into the scooped areas and then carefully buried them with a thin layer of sediment.
Each disk contained eelgrass from five, three or one donor meadow.  Plants from each donor site and from the new restoration site will be tested for their genetic composition and for the relative success of the mono vs. poly-source transplants, measured as the shoot density, percent cover and plot aerial expansion. 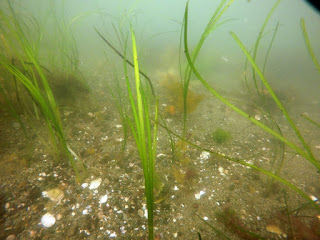 Keep an eye on the blog for updates from our monitoring efforts as well as posts about other interesting eelgrass projects that MarineFisheries is working on!