http://www.mvgazette.com/article.php?33397
This recent article from Martha's Vineyard Gazette underscores the importance of improving water quality in our coastal embayments before eelgrass can be restored.  Water quality improvements are not glamorous and they are very costly, but without clearer water eelgrass won't grow.  Again and again we are hearing about failed eelgrass restoration due to poor water quality (including mucky sediments and high amounts of smothering macroalgae which can both be a result of poor water quality).
Posted by Tay Evans at 12:29 PM No comments:

The Provincetown Center for Coastal Studies took a look at the new conservation moorings that were installed in Provincetown Harbor, a project overseen by the Massachusetts Bays Program. Seven traditional moorings were replaced with conservation moorings in early October. On November 9, videos were taken of six of these moorings as well as one traditional mooring located in the same area. The PCCS Disentanglement Program generously donated the use of their rescue vessel, staff time, and underwater video camera to get this work done. The following video clips show some of the footage captured.
This video clip shows one of the new anchors and Hazelett moorings. A discernible scar, left from the previous mooring, is obvious around the anchor.
One of the moorings was installed in a shallower area. The eelgrass around this mooring was much denser with no obvious scar left from the previous mooring.
This final video clip shows footage taken of a traditional mooring in the same area as the new conservation moorings were installed. The mooring chain can clearly be seen on the bottom within a well-defined mooring scar.
Posted by Amy Costa at 9:00 AM No comments:

Field work for the second round of hubline eelgrass restoration (HUB3) began this season on May 23.  Our goal this summer/fall was to plant a 0.5 acre site in Salem Sound and test-plot several additional locations in Salem Sound and Boston Harbor .
Planting
Wes, Mark and Tay together with dive help from Vin and Holly, harvested plants from the Logan Airport runway safety area (RSA) improvement project footprint and planted test plots at Long Island and Lovell’s Island, Boston Harbor.  We also investigated Thompson’s Island but were not able to find any suitable sites due to the silty organic sediment.  We continued to harvest through the month of June and transported plants up to Beverly, planting them at the impact site (a.k.a Woodbury Point).  By the end of June we shifted to harvesting plants at a donor bed in Beverly off of Pride’s Beach (SW of the SeagrassNet site) and continued planting our ½ acre site.  At this point we went to a two person dive scenario every day with two of the three of us diving (Wes, Tay or Mark).   We brought on Andrew Weinstock in July.   Andrew received his DMF dive qualifications in mid-August.  Unfortunately, Mark suffered an injury in August that has prevented him from diving since then.
Monitoring
Our one month monitoring on July 20, 2011 of two plots at the Beverly site showed 97% of our planted squares were present, but shoot density had declined about 50% (i.e. average of 12 shoots from 24 planted).  The fact that we could find almost all of the planted squares was encouraging, but the condition of the squares was not – low density, wasting disease on the leaves and encrusting membranipora on the leaves.  From the beginning, we considered the site somewhat risky for restoration since it’s a deep edge.  However, its high rating in the site selection model, the success of Battelle test plots at the site, and the presence of natural grass growing between our plots influenced our decision to plant the site.  Also, the site is the HUBline pipeline impact site where grass was growing in 2002 before pipeline construction. This weighed heavily in the decision to replant there. The initial low density of the plots could be explained by several factors.  Human error in planting may have caused some loss of plants.  We did not re-count a day or so after planting to be sure of how many shoots were actually planted, so 24 may be an overestimate of the initial baseline density planted.  Additionally, the Boston plants were taken from a shallow site off of Logan airport and transplanted to a deeper site in Beverly.  Plants may be better able to adapt to new sites that have similar light, temperature and sediment conditions.  The two sites had different depths and different sediment conditions (sand in Beverly and sand, mud and clay in Logan).  The difference in depth could lead to the conclusion that the donor plants may have been light adapted, having grown up at the shallower site.  However, light data is higher at the Beverly deep site (mean hobo data of 3.14 % light and 332.8 lumens/ft2) compared to the Boston site (1.569% light and 198.3012 lumens/ft2 ).
At the end of August the plants were surviving with evidence of some new growth but still at a low shoot density.  It is possible that they could have rebounded.  However on August 28, Hurricane Irene hit Beverly.  After the hurricane, Wes and Andrew monitored all of our Beverly plots.  They reported large sand waves across the site and a loss of approximately 75% of the planted squares.  The site has some rows of grass without sand waves, but most of the squares are now bare sand.  There is no clear trend indicating differential survival of plants transplanted from either Beverly or Boston or to the shallow or deep portions of the site. Plot B1-4 was planted with all Boston plants. Half of the plot now has low density grass and the other half is no longer vegetated.  The plants that are there are rooted and show evidence of new growth.  B3-4 was planted with 4 rows of Boston plants and 8 rows of Beverly plants.  The side with the Boston plants was not hit by the sand waves and still persists, while the Beverly plants are mostly gone.  The deeper A plots are a mix of Boston and Beverly plants and are uniformly patchy and 25% vegetated.
Test - plots at Lovell’s Island and Long Island, in Boston Harbor, have fared well and were unaffected by the hurricane.
Fall Test-plots
This fall we shifted our focus from the Beverly restoration site to plant several test-plots at sites throughout Salem Sound and Boston Harbor.  In September test –plots were planted at the SE side of Long Island, the SE side of Peddock’s Island in Boston Harbor and Middle Ground and Juniper Cove in Salem Sound.
In early October we test-planted a site at the beach near Fort Pickering in Salem (i.e. Winter Island). Chris Pickerell of Cornell Cooperative Extension on Long Island (http://seagrassli.blogspot.com/) visited us to check out our sites and share information.  Chris’s team worked with ours to plant test plots of two treatments to compare the Horizontal Rhizome method developed by Davis and Short, to his new experimental method.
Our field work will wrap up in the last week of October or first week of November for the winter season.
Posted by Tay Evans at 12:37 PM No comments:

Click below to read the Boston Globe article about eelgrass and the UNH/ Nature Conservancy genetic study.
Bid to revive eelgrass population slowly makes headway in region - The Boston Globe
Posted by Tay Evans at 9:35 AM No comments:

The DMF Seagrass group has had an aggressive schedule this summer.  Luckily, we've also had fantastic weather (knock, knock) and an energetic crew (a small team of three rotating divers and two top people - see team photos below - with occasional much appreciated help from two other DMF divers).  So far for the HUB3 mitigation project we have planted test-plots in Boston Harbor and are nearing completion of the Beverly restoration site.  With an opportunity to take plants that will be impacted by the Logan Airport Runway project, we harvested and planted 4,608 shoots from the Logan Airport bed into an approximately 1/4 acre site in Salem Sound, Beverly, MA.  We are now planting the rest of the site with plants donated from a near-by natural eelgrass bed in Beverly.  The total site is 1/2 acre and will have 13,824 shoots when complete. Recent one month monitoring indicated a 97% survival of planted squares (1 m2 planted squares were planted with 24 shoots). 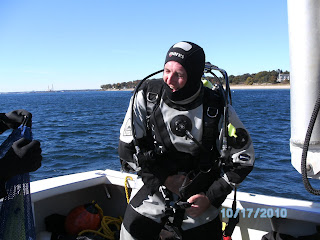 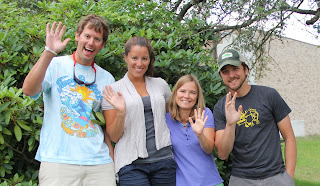 The DMF Seagrass Team - Mark (ready to dive), Wes, Kate, Tay and Andrew (on a rare day on land)
Posted by Tay Evans at 9:27 AM No comments: 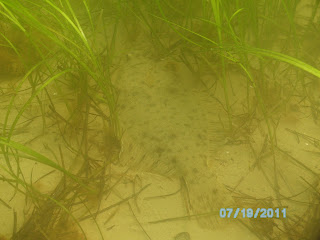 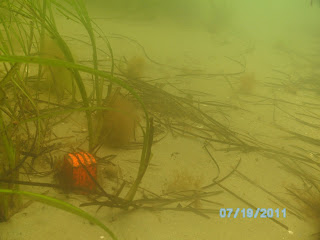 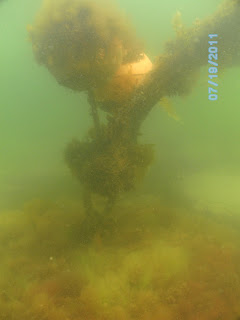 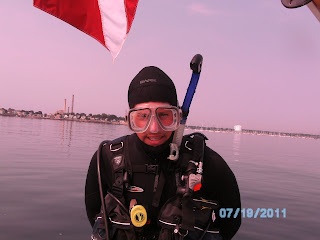 The Massachusetts Division of Marine Fisheries’ Seagrass team finished the April monitoring of  our  SeagrassNet site in Salem Sound.  The water was cold, 39° degrees, but our hearty dive team was happy to be out sampling again after a long winter, including heavy storms that prevented us from completing the January monitoring dives.
The West Beach, Salem Sound eelgrass bed continues to look good overall.  We had a mean  percent cover of 46%, mean canopy height of 35cm and our mean shoot density was 149 shoots/ m2 .  The plants are smaller now in early spring but they are growing fast and will be lush and over 1 meter tall by July.
Here are a few pictures fropm our transects: 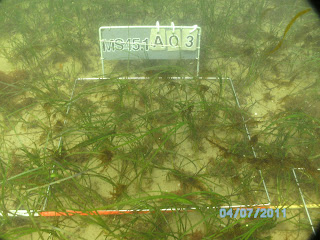 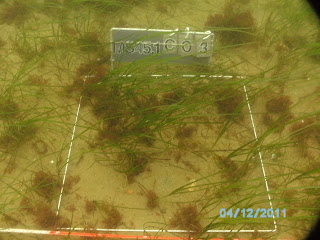 MarineFisheries Article of the Month

MarineFisheries has a monthly brown bag journal club. Next week we’ll be discussing the following paper:

SeagrassSoundings focuses on the work that scientists and managers are doing to protect, preserve, study, restore and monitor seagrass (for the most part eelgrass, Zostera marina) in Massachusetts.
Posted by Tay Evans at 6:19 PM No comments: