You can read the full report on the Fisheries Habitat Program page of the MarineFisheries website.  Click the link below to get there directly.

Not balloons, Man-o-war in Buzzards Bay

Man-of-wars are found, sometimes in groups of 1,000 or more, floating in warm waters throughout the world's oceans. They have no independent means of propulsion and either drift on the currents or catch the wind with their pneumatophores. To avoid threats on the surface, they can deflate their air bags and briefly submerge. http://animals.nationalgeographic.com/animals/invertebrates/portuguese-man-of-war/.

I guess they got trapped in currents and debris pushed north due to early effects of Tropical Storm Andrea.

We saw lots of Man-o-War washed up along the shore of Buzzards Bay yesterday from Chapoquoit to Woods Hole.  This one isn't the best one but I had to run back and get my camera and then this is the only one I could fine.
http://www.capecodonline.com/apps/pbcs.dll/article?AID=/20130706/NEWS/307060324/-1/rss02 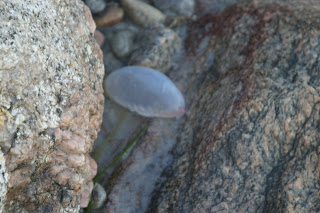 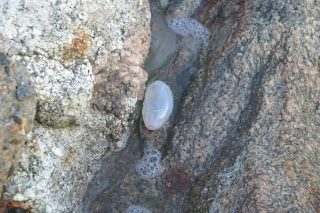 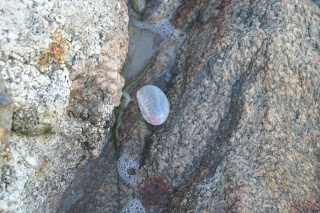 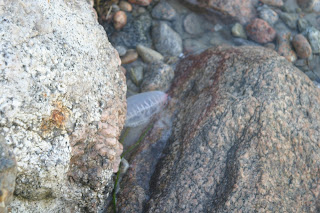 Email ThisBlogThis!Share to TwitterShare to FacebookShare to Pinterest
Labels: Man-o-war

Despite all the bad weather that we've had, it was a very busy and productive spring for the MarineFisheries HUB3 eelgrass restoration project.  Our work has shifted from Salem Sound to Boston Harbor, and the spring was spent planting and monitoring at six sites that were selected last fall.  The sites that were selected for restoration are Green Island, Great Brewster Island, Gallops Island, Long Island, Governors Island Flats, and Deer Island Flats.  All of our harvesting for the Boston Harbor restoration will take place in expansive natural eelgrass beds near Nahant.  We also began monitoring at three reference beds; two near Nahant and one east of Logan Airport.  As noted in a May post, during our initial assessment of the reference beds and harvest sites, it appeared that some of the natural beds had suffered some damage from winter storms that battered the area.  While we don’t have enough data to say for sure, the beds do seem to be rebounding as seedlings are growing and filling in some of the bare areas.

The Boston Harbor sites are set up in a similar layout to our six plots per ¼ acre sites in Salem Sound.  The plots that were planted this spring will act as test plots and five additional plots will be added to the sites that are deemed successful based on the initial plots.  Our goal is to get at least 1 acre planted in Boston Harbor.  We are planning to use volunteers for large scale planting days again as last year’s volunteer days with Salem Sound Coastwatch and The New England Aquarium’s Live Blue Ambassadors program were a huge success.

Earlier in the spring, we looked at two of our restoration sites that were planted last year in Salem Sound.  Both the Woodbury Point site and the Middle Ground site survived the winter and appeared to be expanding.  A full monitoring event is planned for all of the Salem Sound sites in late July so that we can determine the actual one year success of those sites.

We are all keeping our fingers crossed for the weather to begin to improve.  We have a lot of work to do throughout the summer, so stay tuned for further updates.